Southern Italy, where INTERNET does not exist for 1 out of 3 people

Italians are increasingly online, although below the European average.
Let’s try to quantify the phenomenon, with particular attention to the use of social networks. On 11 April Istat published “We Italy – 100 statistics to understand the country in which we live”, or a complete picture of Italy, drawn from over a hundred indicators divided into six areas and nineteen sectors. Among the reported data, we read that in 2018 the use of the web increased, since more than one person in two is online daily, in particular 68.5% of people over six years old connect. However, in Europe we are in the last positions and after us there are only Greece, Croatia, Bulgaria and Romania. Italy is below the European average also due to another indicator, given the number of families that have access to the Internet. The center-north is better, with 71.8% and 76, 2% who have a fast connection, but in the South the percentages are 62.2% and 68.5%. It is therefore not surprising to read that Italy is the nineteenth in Europe in the ranking of countries in which companies with at least 10 employees use a website .

That social networks have become a habit is confirmed by the reaction of users last Sunday, when more or less simultaneously Facebook, WhatsApp and Instagram had problems and did not allow users access

We are increasingly online but lagging behind other European partners. At this point we can ask ourselves what our compatriots do on the Internet. An answer can come from other data, those Audiweb powered by Nielsen, provided by Vincenzo Cosenza and which have as their object the social networks. The analysis takes into consideration the total digital audience, that is all the people who access it from desktop and mobile. Last summer we read that in Italy the active users of Facebook are 31 million per month, of which 29 million from mobile and 25 million per day, of which 24 from mobile devices. Now we have more details. 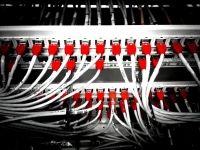 The Menlo Park company confirms its leadership but it seems that in December it was overtaken by Youtube . Instagram is growing, in third place, with 24.4 million Italian users and Linkedin, which earns 69% in one year and reaches 16.5 million subscribers. Then another image-based platform follows, Pinterest that collects 12.3 million users and is therefore above Twitter, out of 9 million. It should be noted, however, that the 280-character social network has regained the same level of audience in 2014 and is growing. The quick round-up ends with Tumblr and its 2.6 million users, Snapchat, which has two hundred thousand less and Tik Tok, which does not reach one million. Cosenza also reports the average usage time. Facebook on average is used fourteen hours a month, Youtube five hours and twenty minutes, while Instragram catches the attention of its users on average for five hours a month. Affect the only thirteen minutes of Linkedin and just over sixty minutes of Twitter.

That social networks have become a habit is confirmed by the reaction of users last Sunday, when more or less simultaneously Facebook, WhatsApp and Instagram had problems and did not allow users access. As reported by the Guardian among others, already in March there had been similar episodes and this time most of the reports came from America and Europe. Disbelief and disappointment have characterized many comments that appeared online, some have joked about the dependence on digital platforms but in reality this is a phenomenon that should not be underestimated. What is desirable is that the percentage of Italians connected may grow. The potentials offered by the network are manifold and its use is essential not only for professional reasons but in general to have more information and therefore to expand the opportunities for knowledge. An example of this still comes from the Istat report, according to which, in fact, especially among young people between the ages of 20 and 34, the web-based reading of newspapers and magazines has increased.