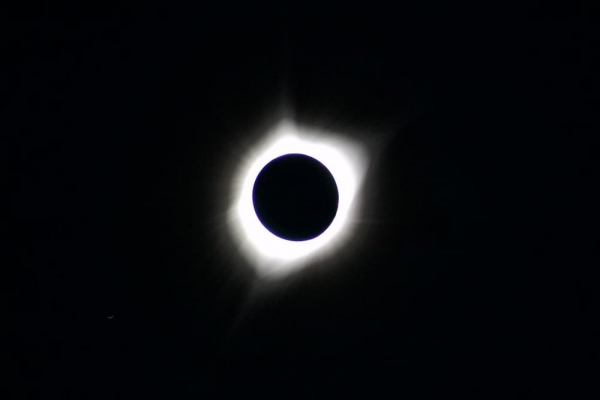 ECLISSI SOLAR 2019 – July 2019 is the month in which the fiftieth anniversary of the landing on the Moon falls. And it will be a month full of extraordinary astronomical shows. One of these is the total solar eclipse on Tuesday 2 July . Eyes pointed towards the sky, then. The totality of the solar eclipse will be visible in particular from the southern Pacific Ocean to the east of New Zealand to the Coquimbo region in Chile and in Argentina at sunset, with the maximum of 4 minutes and 33 seconds visible from the Pacific Ocean. In Italy it will not be possible to see the total solar eclipse live, but there are

ECLISSI SOLAR 2019 – The total solar eclipse occurs when the Moon completely obscures the Sun. This occurs when the satellite is at a suitable distance between the Sun and the Earth: the Moon orbits about 385 thousand kilometers on average from Earth , at a distance that seems to be the same size as the Sun.

For a few moments, the day will become night and this following the passage of the Moon in front of the Sun. The event will start at 7.54 pm Italian time and the maximum peak will be reached at 9.21 pm until 9.24 pm (always Italian time). After 21.24 the Sun will appear again and the eclipse will end at 22.02.

ECLISSI SOLARE 2019 – For the occasion, on 2 July the astronomical observatory opens its doors to the public, for a special day dedicated to the eclipse, defined by the EES as “the most beautiful natural phenomenon in the sky”. Bookings are already all sold out. Who has not been able to face the journey, or has not had time to organize, can follow the black shadow of the Moon that little by little devours the solar disk in streaming, from home.

At the La Silla observatory the maximum of the eclipse is expected at 4.40pm on July 2nd (10.40pm, Italian time), when the Sun is low on the horizon, next to set. The totality phase lasts about two minutes. The overall duration of the phenomenon is, instead, of just under two hours. “It is a unique opportunity – the scientists of the ESO conclude – to witness the sole total eclipse of the Sun visible from an observatory of the ESO for the next 212 years”.

Barcelona chaos: Griezmann coming, but Messi wants Neymar. Bartomeu: “He wants to leave, the PSG does not sell it”

Eat Beetroot Daily and This Can Happen to Your Body

Drink a glass of wine or beer occasionally, but beware larger amounts.

Thai tattoos: do you know their story?