Your back pain can hide a hernia 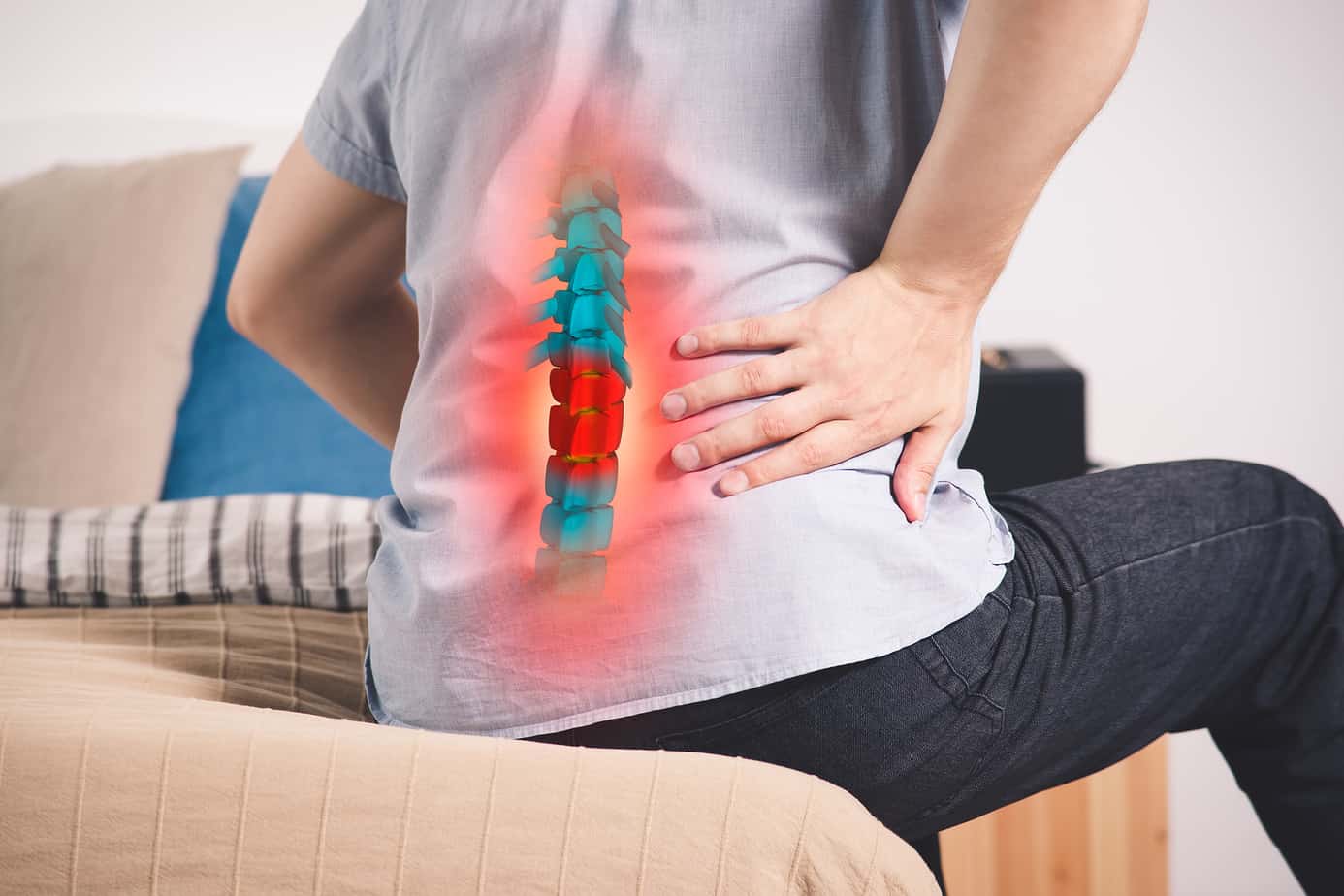 We usually attribute back pain to incorrect postures or muscle overloads, but in some cases this is due to an alteration of the discs that separate the vertebrae. Understanding if this is the case will help you solve it as soon as possible with the help of your doctor.

It is estimated that the herniated disc is the cause of 2% of localized back pains. Among these, the most common is that involving the disc between the fifth lumbar vertebra and the sacrum. It is not a disorder related to age or aging; in fact it usually appears between 35 and 55 years old. It seems to be very related to the efforts you have put on your back.

Index
WHAT ARE THE CAUSES?
WHAT ARE THE SYMPTOMS?
HERNIA OF THE DISC OR SPINAL STENOSIS
SLIPPING OF VERTEBRAL BODIES
What exactly is a herniated disc
When surgery is needed
WHAT ARE THE CAUSES?
The spine is formed by multiple anatomical structures, including muscles, bones, ligaments and joints. The tissues between the bones of the spine are called “intervertebral discs” and are composed of a central portion with a softer and gelatinous consistency, the pulpy nucleus, and an external covering, the fibrous ring. When the outer coating of the disc breaks, the pulpy core may come out of its seat causing a herniation of the disc. Basically, the overload and physical effort (habit of carrying weights), but also situations that strain a column unused to these traumas, such as pregnancy and obesity. Genetic causes, although possible, are much less frequent. Usually they concern people with symptoms that suggest a herniated disc,

WHAT ARE THE SYMPTOMS?
Most back pain disappears in a few days, at most a few weeks, but this is not always the case. In this case it is advisable to consult your doctor to find the cause and determine if a specialist treatment or visit is necessary. Alterations of the column. In some cases the origin derives from an alteration of the column, that is a radicular compression (sciatic nerve, crural) or the crushing of a vertebral body. Symptom of other alterations. A trauma may be the most common cause, but lower back pain can also be the consequence of a renal disorder (infection or stones). Gastric ulcer, biliary colic, inflammation of the pancreas or even a posterior myocardial infarction may also initially manifest with severe back pain.

HERNIA OF THE DISC OR SPINAL STENOSIS
Slipped disc. It consists of the rupture of an intervertebral disc, which acts as a buffer between two vertebral bodies. The herniation goes to compress the marrow (cervical, dorsal and high lumbar tract) and / or the spinal roots causing pain and / or neurological deficits.

Spinal stenosis. With age, variations in the size and shape of the vertebral canal may occur. In some cases, some of these channel changes, such as its narrowing (vertebral stenosis), can cause pain and sometimes neurological deficits.

SLIPPING OF VERTEBRAL BODIES
Diagnosis of one of these conditions is made with dynamic radiography, CT or resonance. Slip. In some cases the pain occurs when a vertebral body slides forward or backward, sometimes in conjunction with a disc hernia. The movement of the vertebrae can also occur following a trauma, as well as arthrosis. If bone density is reduced. It happens with osteoporosis: the vertebral bodies resist less than the weight of the column, therefore they crush and sometimes fracture. This generates dorso-lumbar pain, which can be associated with neurological disorders.

What exactly is a herniated disc
The vertebral column is formed by 24 mobile vertebrae, separated from each other by the intervertebral discs and by the block of the sacro-coccygeal vertebrae. With time, these structures
(vertebral bodies and intersomatic discs) can change (arthrosic deformation of the bodies and / or dehydration of the discs) and so also the musculature that supports it.

When surgery is needed
When back pain is the consequence of a pathology of the spine, susceptible to surgical therapy, the specialist (neurosurgeon or vertebral surgeon) will be able to recommend the most suitable one. Herniated disc. One of the most modern techniques is the microdiscectomy (small incision of the skin and removal of the hernia with the aid of the microscope) which is performed by inserting a small tube in the column. Spinal stenosis. It is initially with physiotherapy, but if it is not sufficient, infiltration or surgery is used to widen the vertebral canal, freeing the spinal root.

Extra virgin olive oil: health and taste in the kitchen