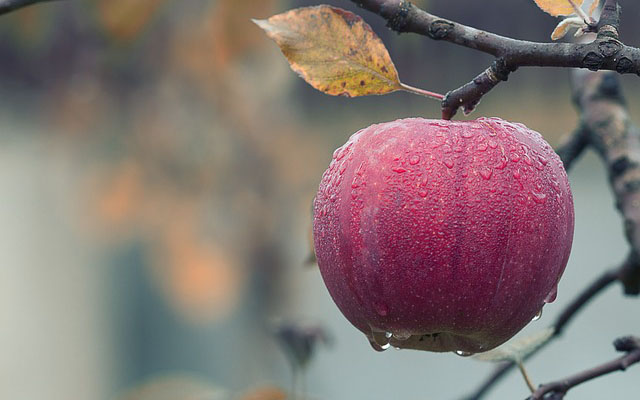 Sometimes traditional folk wisdom can provide important advice for healthy living. But in the case of apples – “An apple a day keeps the doctor away” – that’s not necessarily true. In fact, apples carry some risks that may actually send you running to the doc. For starters, there is a portion of apples that have the potential to be deadly. Pesticide residue and common allergens may also damage your health.

But it’s not just about getting sick; apples may simply not support your health goals, especially if you are trying to lose weight. Interestingly, this is not about the sugar content, though apples do contain a lot. The fact that apples also have a good deal of fiber keeps them from dangerously spiking blood sugar. Apples also contain an antioxidant called quercetin that has been linked to a reduction in cancer risk.

Are the benefits of apples enough to outweigh the risks? After all, plenty of other foods contain quercetin, including grapes, broccoli, red onions, tea, and peppers. Join us as we explore the darker side of the classic All-American apple, including a few ways to mitigate the risks.

In the end, you may not decide to stop eating apples all together, but you will certainly think twice in the supermarket.

Apple seeds contain something called amygdalin, which converts into deadly cyanide when the seeds are chewed or crushed. It’s an effective defense mechanism for the fruit because cyanide interferes with the oxygen supply going to your body’s cells, and can kill a person within minutes at a high enough dose.

Accidentally eating a seed or two won’t kill you, but it can cause negative health effects such as dizziness, weakness, confusion, headache, nausea, vomiting, and stomach cramps. But don’t worry if you just swallowed the seed without chewing it. In this case, it is likely to pass through your system undigested. It is only when the seeds are crushed that the conversion to cyanide takes place.

Apples are Covered in Wax

Apples produce their own natural waxy coating, but when producers wash them before sending them to market, this coating is removed. To compensate, the apples are then covered in a synthetic wax to make them appear glossy and firm. That visual effect disguises the age of the apple, making it impossible for consumers to know if their apples are fresh before buying them.

The waxy coating is officially considered safe, but many people report health issues like respiratory distress, ulcers, or infections. If you feel uncomfortable after eating an apple, the wax could be the culprit. Unfortunately, this coating is used in both organic and conventional apples, but some individual brands do avoid it. You’ll need to do some research to discover if non-waxed apples are available in your area.

Apples are Loaded With Pesticides

Apples always appear on the Dirty Dozen list produced by the Environmental Working Group to reveal the most pesticide-laden produce each year. In fact, apples have been known to reside at number one on the list for more than 5 years running.

Pesticide can be difficult to wash away from the fruit due to its waxy coating. A better option is organic apples, but these can be extremely expensive.

A healthy breakfast is the foundation of a good day