OTITIS: WITH WHAT SYMPTOMS DOES IT OCCUR AND WHY DO WE OFTEN SUFFER IN THE SUMMER? 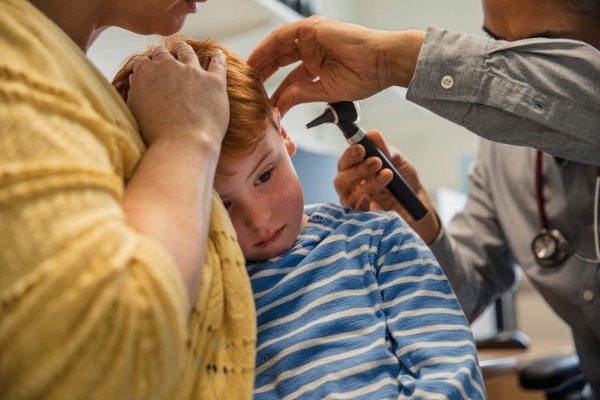 The ear is one of the most important organs of our body: in addition to allowing us to perceive sounds, it guarantees static and dynamic balance.

It is composed of three main areas (outer ear, middle ear and the inner part), and it is very delicate: in some periods of the year, as during the season changes, it may be subject to infections. The most common is otitis , which can have viral or bacterial origin, but which can also occur when practicing water sports or in the summer, by the sea .

Let’s see together what are the main types of otitis and the symptoms related to it.

OTITIS: THE SYMPTOMS
Otitis often occurs as a result of a sore throat or a cold , but it can also be caused by a long and prolonged exposure to moisture and water. Its course can be chronic (when the patient fails to eradicate the infection spontaneously and needs a longer cure) or acute (when the infection ends spontaneously in a short period of time).

Otalgia , or earache, is certainly the typical symptom of otitis and its intensity may vary depending on the area of ​​the ear where the inflammatory process is located. Along with pain , other specific symptoms may also appear, such as itching, swelling and redness in the outer area of ​​the ear and the ear canal. In some cases there may also be a secretion of pus or blood (in the most serious cases) accompanied by lowering of the hearing (the presence of the plus can block the passage of sound). In the specific case of internal otitis (labyrinthitis) symptoms such as dizziness and difficulty in maintaining balance , as well as nausea andpallor.

OTITIS EXTERNA OR OTITIS OF THE SWIMMER

Commonly called “swimmer’s ear infections” , it is most interesting for those who spend a lot of time swimming or swimming in the sea, which is why it is not uncommon to suffer during the summer. This pathology of the ear can originate from the contact of the ear canal with water and moisture . The infection, which mainly affects children and young people, can originate from viruses and bacteria, but is often caused by different kinds of fungi present in the water that proliferate in the ear canal.

To cause this type of otitis can also be a too vigorous cleaning of the ears, perhaps carried out with the help of cotton sticks. The lesion of the skin, which in this part of the body is very thin and delicate, can cause, in fact, a direct passage of fungi and bacteria inside the ear. Otitis externa can also be caused by acute otitis media, an infection of the middle part of the ear.

In addition to moisture and the presence of an accumulation of wax, there are also some factors that can favor the onset of this inflammation, such as the presence of immunosuppressive diseases, diabetes, trauma and excessive sweating.

OTITIS MEDIA
This inflammation of the middle ear (the space between the eardrum and the inner ear) mainly affects children and is in fact one of the most common pediatric diseases, considering that according to the Guidelines for the management of otitis media Acute of Italian Society of Pediatrics, 85% of children are affected by at least one episode of acute otitis media and 46% within the 3 years of life will suffer at least three forms of otitis. The Eustachian tubes, which connect the middle ear with the nasopharynx, in children are shorter and horizontal and therefore favor the reflux of nasopharyngeal secretions and the proliferation of viruses and bacteriawhich cause inflammation. The swollen and reddened tympanic membrane no longer vibrates as before and causes temporary hearing loss.

Often this type of otitis can be associated with an upper respiratory infection, such as a simple cold. If it is not adequately treated, however, otitis media can generate a perforation of the eardrum , seriously compromising the patient’s hearing ability.

INTERNAL OTITIS
This inflammation mainly involves the labyrinth , which is a small inner auricular portion consisting of organs involved in maintaining balance and listening. Although it is not entirely possible to reconstruct the root cause of internal otitis, it seems that it can be linked to bacterial infections such as acute otitis or mumps (mumps), to possible allergic reactions to some drugs and to meningitis .

OTITIS: THE DIAGNOSIS
The diagnosis of external otitis is based on otoscopy and clinical evaluation . If the secretion is abundant, it is often difficult to distinguish this form of otitis from a purulent medium. If a fungal infection is present, it can also be diagnosed by a microbiological culture test . As for otitis media, on the other hand, it can be diagnosed instead through different tests such as:

Visit with the otoscope
Timpanogramma (test that verifies the presence of liquid and mucus in the middle part of the ear and the functionality of the Eustachian tube)
Audiometric examination
Tympanometry (verifies the movement of the eardrum and internal pressure in the middle ear)
L ‘ otitis interna instead can be diagnosed through tests such as:

Electronistagmography (electronic recording of the movement of the ocular globes),
The TAC
The magnetic resonance imaging .
HOW TO CURE OTITIS

Especially in childhood, when it is easier to be affected by this infection, the symptoms may be accompanied by vomiting, crying, diarrhea and loss of appetite. It is important not to underestimate the otitis , since if it is not treated correctly and in time, it can easily lead to medical complications, although most of the times the symptoms resolve spontaneously after some time.

In the case of otitis it is generally prescribed an antibiotic therapy (in the case of bacterial infection) and antiviral (in the presence of virus), while the pain relief therapy can be effective to counteract the ear pain.

In the specific case of otitis externa, it may also be useful to use antiseptic compounds in the ear canal flushing, while in the case of labyrinthitis corticosteroid drugs can reduce inflammation in the ear.

In any case it is always good to consult the doctor who can prescribe the most suitable drug therapy based on the type of otitis that presents the patient.

PREVENT OTITIS
As indicated by the Italian Society of Pediatrics, some fundamental precautions must be taken to prevent otitis . First of all, strict hygiene measures are necessary : just think that washing your hands thoroughly can reduce the risk of otitis by a third. Finally, vitamin D , which increases immune defenses, can be a useful ally to prevent the risk of otitis recurrence in children.

Furthermore, it is good to remember that otitis externa often strikes in summer , when you spend more time in the water, at sea or in the pool. If you spend your holidays at sea, the advice is to always dry your ears well. If you experience the first symptoms such as discomfort and pain, the best solution is to avoid letting other water enter the ear canal for a few days and consult a doctor to verify that the infection is not in progress.