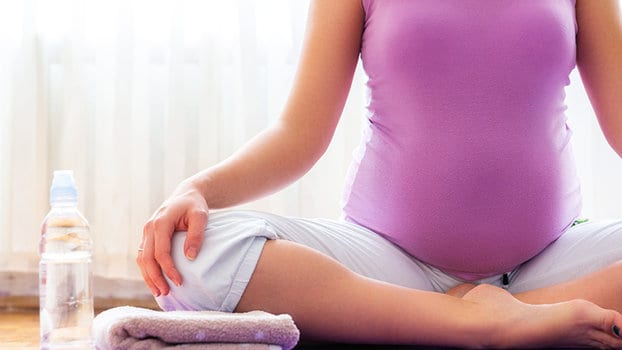 Nutrition, physical activity and some beauty products are some of the weapons available to future mothers to get in shape at the time of birth.

Pregnancy is not a disease or a “stop” to normality: but the wait should be lived as the unique opportunity to finally take time for oneself. Especially in the first quarter, when the luxury of a slow adaptation should be granted: it is not by chance that the body often forces us to slow down, with the constant desire to sleep, the nausea, and sometimes even the contractions.

Sports ? Yes thanks! But with judgment
Waiting time and preparation for childbirth: but slowing down does not mean becoming inactive, on the contrary. “Physical movement continues to be healthy, without excess or force,” explains Sabina Pastura, midwife of the La Lunanuova Association. «Step and aerobics are not indicated, but pilates , swimming and yoga are great. It is true the traditional advice of not lifting weights, because the back is already very stressed for the center of gravity shifted due to the belly and for the increase in weight ».

Walking, gentle exercise, exercise bikes and golf can be done throughout the pregnancy if there are no complications. But it is important to always provide warm-up and cool-down exercises, do not make sudden movements, do not exceed twenty minutes-half an hour of activity and never get out of breath.

At the table without exaggerating
Diktat is now completely debunked that according to which in pregnancy it is necessary to eat for two. According to Iran, the National Research Institute for Food and Nutrition, a normal-weight woman with a body mass index (BMI) between 18.5 and 25 – a result obtained by dividing her weight by the square of the height – it should increase in the nine months between 11.5 and 16 kilos; those who are underweight (BMI less than 18.5) can reach 18 kilos, while those who are overweight (BMI greater than 25) must stay between 7 and 11.5 kilos.

In the first quarter you can eat as before. From the fourth month 350 extra calories are needed: the equivalent of a sandwich for lunch and dinner. For Giorgio Donegani, nutritionist, “It is better to avoid the excess of whole foods that make iron and calcium absorption more difficult , but since the fibers are useful to combat the constipation that afflicts many future mothers, a good solution is to eat fruit and vegetables and take whole grains for breakfast, mostly already added with some minerals ».

Yes to fish 3-4 times a week, especially salmon, tuna, swordfish and bluefish in general because it is rich in omega 3, useful for both the fetus and the mother for circulation. Omega 3 is also found in nuts, green leafy vegetables and legumes.

Do we make a toast? Better not
“Until recently, it was believed that the effects of alcohol on the fetus depended on the dose: more serious the greater the quantity taken by the mother,” explains nutritionist Giorgio Donegani.

“It has instead been seen that alcohol, which passes to the child through the placenta, has more or less serious consequences depending on the instant in which it comes into contact with the fetus: in theory, even little can harm the child if the alcohol reaches the placenta at a time when tissues are being built at the cellular level, regardless of the month of gestation. It is obvious, then, that the greater and more frequent is the consumption of alcohol, the higher the risk of interfering with the development of the fetus », the expert explains.

Not to risk
Among the most known infections of pregnancy is toxoplasmosis, caused by a protozoan that can be found in vegetables or meat and can cause damage to the fetus. If the toxo-test at the beginning of pregnancy is negative (that is, the woman has never contracted the infection and does not have antibodies) the risks must be reduced to a minimum: preferably consume vegetables and meat always well cooked, and wash the raw vegetables very carefully.

Absolute safety can only be achieved by immersing them in a solution based on water and sodium hypochlorite, which can however give the vegetable a chlorine flavor. Bicarbonate, on the other hand, is not enough: it only facilitates the elimination of soil residues, but does not have a disinfectant power.

Absolute stop to carpaccio and tartare. Safe cured meats are cooked ones: cooked ham, mortadella and sausage. On the other hand, fresh ones (sausages) are at risk. The majority of gynecologists also advise to avoid, for caution, even the seasoned ones.

Hair in order
Beware of dyes: the risk that the chemicals contained in the dyes pass into the scalp, enter the circulation and are absorbed by the placenta is very low. But as a precaution, according to dermatologist Antonino Di Pietro, “Better to avoid supermarket and chemical hairdresser ones, opting for vegetable-based dyes, such as chamomile , henna, walnut husk and amla oil, sold in herbal medicine”.

No problem even for highlights and sunstroke, because the substances are distributed only on the hair and do not come into contact with the scalp.

No sex in pregnancy?
According to the gynecologist Alessandra Graziottin there are three reasons for the caution of the doctors: “The fear of potential negative effects of friction between the penis and cervix, the fear of the contractile effect of prostaglandins contained in the sperm and the prevention of possible transmissible infections from man to woman and then to the fetus. But the latest research – reassures the gynecologist – reveals that a normal sexual relationship cannot interrupt a pregnancy that is well established and well nested in the uterus. Moreover, in a stable couple the risk of infections is absent ».

Beauty and surroundings
The hated stretch marks depend on the strong stress to which the collagen fibers and elastic fibers that make up the dermis are subjected, the deepest part of the skin. Breasts, abdomen and hips are the most affected areas.

The creams “work” on the epidermis, the most superficial layer, so they cannot completely prevent the appearance of stretch marks, but they can improve the elasticity of the skin. On the other hand, oils penetrate more deeply: emollient, nourishing and healing oils are recommended, such as sweet almond oil, wheat germ, jojoba, avocado, calendula, hypericum or musqueta rose. Creams with phospholipids, alfairdoxyacids, vitamins and hyaluronic acid are also useful.

For hair removal, it is best to avoid waxing that can be harmful to the veins already dilated by the action of hormones: the safest method in pregnancy is the razor.

Facial skin care: how to keep it young