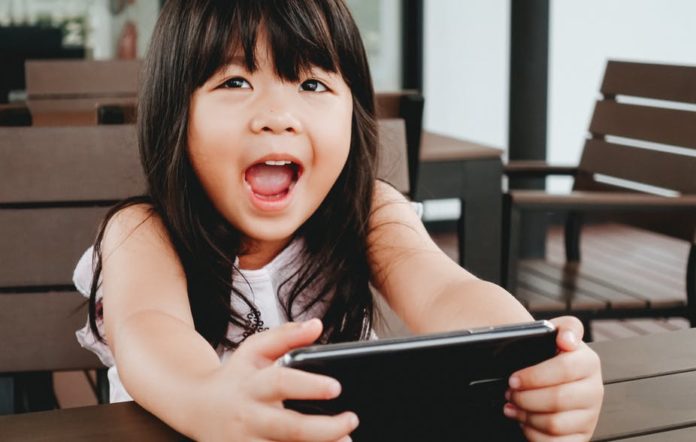 Great question, Tom! There’s a lot of amazing technology packed into mobile phones and tablets. Nowadays, most have a touch screen, speakers, a microphone, WiFi, Bluetooth, a camera, a telephone and more.

Underneath all these fun features, though, mobile phones and tablets are basically mini computers. And computers work by carrying out instructions we humans have given them.

To a computer, everything is a number. A picture? Lots of numbers: three for every tiny dot in the image. A sound? A long list of numbers, including one for how “loud” the sound is at each point in time (that’s thousands every second). A word? Each letter has its own unique number, too.

Machine brains
Computers have a machine “brain” called the Central Processing Unit (CPU), which has two main jobs: getting instructions from the computer’s memory, and carrying them out. The instructions are stored as numbers, too, of course.

The programs or “apps” you find on a mobile phone or tablet are basically lists of instructions. With a bit of practice, you can even write your own: it’s called “programming” or “coding”.

But writing down lots of lists of numbers to give your instructions to the computer would be really difficult, and takes a very long time. Luckily, people have invented special coding languages, that are much easier for us to read and understand.

There are lots of different programming languages these days, with names like C, C++, Python and Java. Different languages are better for different jobs – but mostly it’s just down to what the programmer likes to use.

There are even programming languages made of different shapes, like a jigsaw, which can be great for learning – like Scratch, which you can use to make games.Once you’ve used one of those languages to make a list of instructions, you run it through a special programme – called a compiler – that turns them into programs or apps that computers can run.

The operating system also lets you do lots of things at once, so you can still get a phone call even while you’re playing a game.

And, of course, mobile phones wouldn’t be very “mobile” without a battery. Batteries have been around for at least 200 years, but they have got a lot better recently, so they can power complicated things like mobile phones, tablets – and even electric cars.

Batteries work by converting chemicals to electricity. With an adult’s help, you can make a simple battery using fruit and some coins, which is fun – but wouldn’t be strong enough to run a mobile phone.

Things That Happen If You Eat Mango Every Day