HISTORY OF CYCLING AND ITS EVOLUTION 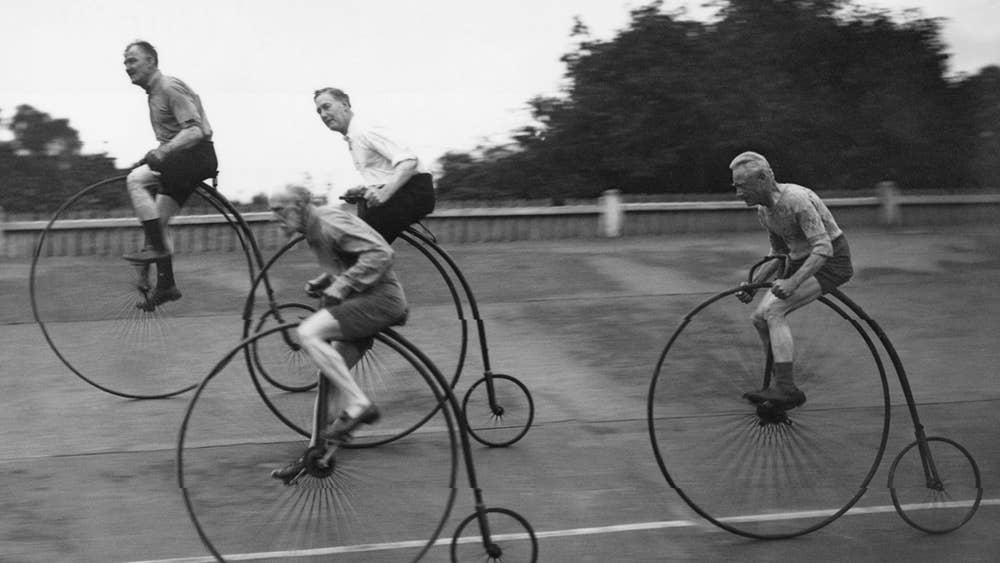 The first great theory of cycling goes back to Leonardo da Vinci, in 1490, who left very significant sketches on the subject. These projects included wheels of the same diameter with a pedal and belt transmission system that faithfully followed our chain concept. The only fundamental thing that was missing was the steering.
In 1790 the celerifero of Conte Mede de Sivrac was born, of wood, without steering and chain, with advancement to push.
The draisine of Von Drais (German baron) dates back to 1818 and consisted of a handlebar to direct the front wheel and a saddle; the advance was always in thrust, as was the material: wood.
The first “real” bicycle was invented around 1839 by a Scottish blacksmith: Kirkpatrick Mac Millan and consisted of an “improved draisienne”, to which Mac Millan had installed a skilful pedal system. Unlike the draisienne, it became possible to roll without the feet touching the ground.
The first velocipede (so named by the French Michaux in 1855) model Michaudina had the pedals engaged directly on the front hub, whose wheel was very large (about 3 meters). The frame was made of iron and the skate brake was on the rear wheel. This bicycle was a great success, and went from the two specimens of 1861, to the 4 specimens of 1865. The function of a large front wheel was to increase the distance traveled as a function of time, therefore to increase speed. The height of the front wheel forced the cyclist to use a step to mount in the saddle.
During this period the first bicycle races were also born, which had the function of promoting this medium, so the aims were commercial.
In 1868 forged steel frames and forks, wooden wheels encircled in iron, rubber wheel coverings appeared.
In 1869 Paris – Rouen was born in France (the first major road cycling race , from Paris to Rouen over a distance of 126 kilometers, with the participation of 304 competitors), won by the English veterinarian Moor, who traveled the distance at about 15 km / h .
The first race in Italy dates back to 1870 (Florence – Pistoia); 33 km traveled in just over 2 hours.
Around 1875 the “great B” also known as “the spider” appeared in England, with the front wheel 1.5 m in diameter, at whose hub the pedals were placed, while the tiny rear wheel served only as a support point.
The first Italian classic (1876) was won by Maghetti, who traveled 150 km from Milan to Turin.
In 1877 Rousseau invents the multiplier gears applied to the front wheel, with chain drive.
Between 1876 and 1879 Shergold, Vincent and Lawson applied the gears to the rear wheel.
In 1880 in New York in America, the first 6 days of track racing was born.
In 1883 in England Starley introduced the chain transmission on his “safety”, in addition to reusing the tangential and non-perpendicular spoke system to the hub, for a better distribution of the load.
In 1888 Dunlop invents the tire; with the arrival of the Dunlop tire the problem of the bumpy roads of that time was resolved above all, making the bicycles more comfortable and practical.
Between 1889 and 1890, Michelin and Pirelli respectively made changes to the tire invented by Dunlop.
In 1890 the Paris-Brest-Paris was born: 1260 km no stop to pedal day and night.
1896: here is the first French classic called Paris-Roubaix.
In 1897 the first free wheel was born.
In 1898 the hubs equipped with “rear-pedal” brakes are installed on the bicycle.
Between 1900 and 1912 the number of bicycles in Italy increased, up to around one million copies.
History of cyclingIn 1903 the Tour de France was born, which was won by Maurice Garin, a chimney-sweep from the Aosta Valley.
Six years after the first “Tour de France”, in 1909, Italy adapted and organized the first “Tour” of the peninsula, thanks to the inventiveness of Uccio Costamagna of “La Gazzetta dello Sport”. 127 runners at the start of the race who did not yet have the pink jersey as a symbol of supremacy and the ranking was not based on the time taken by each rider, but on the basis of a score assigned at the end of each stage finish. And already in the first fraction the “Giro” lost two of the probable favorites: the “red devil”, the Asti citizen Giovanni Gerbi and the French Lucien Mazan who called himself Petit Breton (in homage to his origins) both involved in two different falls .
Finally, professionalism was born in 1912.

The main specialties on the track are represented by:

On the basis of the classification of the cycling specialties it is possible to distinguish the specialties in long-term competitions (mainly aerobic, such as stage races), medium-duration races (with aerobic – massive anaerobic , for example the races in points) and short-term tenders (with a prevalent anaerobic commitment, for example: the kilometer from a standstill).

What link exists between malaria and thalassemia?